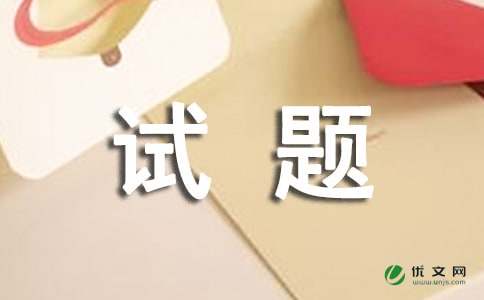 A. not drive so fast B. drive fast enough

C. not to drive so fast D. to play basketball instead

A. the other B. another student

C. can close his eyes D. can get to sleep

A. last week B. tomorrow C. an hour D. at that time

A. there has B. there have C. there is D. there are

A. away from B. far from

A. writes, is written B. wrote, was written

A. to open, OK B. opening, Certainly not

When I was walking down the street one day, I found a small bag on the ground. I picked it up and opened it to see if I could find out the owners name. There was nothing inside it except some dollars and a picture of a woman and a young girl about twelve years old. I put the photo back and took the bag to the police station. Before I left, the policeman wrote down my name and address. He thought the owner might want to thank me.

That evening I went to have dinner with my aunt and uncle. They had also asked a young woman to have dinner with us. Her face was familiar, but I couldnt remember where I had seen her. During our talk, the young woman happened to say that she had lost her bag that afternoon. All at once I remembered where I had seen her. She was the young girl in the photo, though she was now much older. She was very surprised, of course, when I told her about the bag.

After dinner we went to the police station and got back her bag. The policeman said to me, “ It’s a wonderful thing. You found not only the bag, but also the owner of the bag .”

B. a new photo and some money

C. an old picture and some money

D. some dollars and a piece of paper

C. find whose bag it wasD. find the owners photo

A. a policemanB. his uncle

C. his auntD. his friend

4. How many people had the dinner that evening?

A. he had met her somewhere

B. she was the old woman in the photo

C. she often had meals with the writer

D. she looked like the girl in the picture