We Chinese place a high value on responsibility. It is traditional deal for us Chinese to take care of our parents. We owe them a great deal for the love they give us while we are growing up. It is right, then, when they are getting older with each passing day, we help them and see that they are well cared for. In this way, we give back some of the love and care they have given to us. 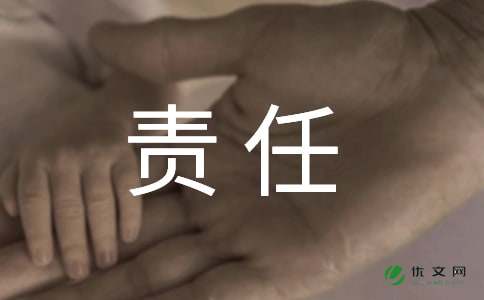 As loyal Chinese citizens, we must have a strong sense of responsibility to our country. I t is our duty to keep China strong in the eyes of the world. Therefore, we should study and work hard for China's strongness which also depends on the advanced science and technology. We must be willing to join the Army and defend our country, would we be threatened by an invader. In short, to be a responsible citizen ,we must put our country's welfare above our own needs.

Finally, we must remember that we have a responsibility to the world we live in. It is important that we learn to live in peace with the other nations of the world and to protect our environment.If we carry out these responsibilities, we will be respected citizens of our country.

When the issue of poisonous milk powder gains an overwhelming focus from the public, what are these malefactors doing? As we can see from the depiction, enterprise, milk station, milch cow and even grass are trying to find someone scapegoating for this credit crisis, in my view point, that’s nothing to do with the credit but the problem of responsibility.

Responsibility is a keyword that we should never disregard, defined not only as the courage to face every foreseeable risk, but as the braveness to entail every malpractice when it really takes place as well. The causes of the shortage of responsibility or even conscience may be as follows. Firstly, inner cause ascribing probably to the destructive influence emanating from the decay of morality may result in the over-materialism .Furthermore, outerly , deficient supervisal gives rise to the fearless adventurer who is at the risk of anything ,not to say to deviate from his own liability ,to pursue as many as profits. A case in point is the Melamine-laced Milk Incident which almost destroyed the whole of China’s milk industry.

It is imperative that drastic measures should be taken to end this thorny situation, such as enacting related law to reinforce our supervisal mechanism to avoid the behavior of kicking the ball when something bad happen and promoting social entities to regain one of Chinese traditional virtues, which is called “who would enter the hell if I wouldn’t”,that means, undoubtedly, to learn to be responsible for the blunder means sensible unflinchingness.

The concept of responsibility is a necessary fiction. Although socities must hold their individuals accountable for their own actions, people's behavior is largely determined by forces not of their own making."

In the title statement, the speaker holds the contention that the concept of 'individual responsibility' is no existence but a fiction. Moreover, the speaker says that the behaviors of human beings are fundamentally determined by the environment which out of their control. Admittedly, one's actions are deeply influenced by laws, societies, schools and families and other exterior forces; individual responsibility exists and functions as a significant role to rule people's behaviors as well.

On one hand, the highest social animal as human being is, any individual has his specific role in a certain society. And this specific role gives one social identity and individual responsibility through education in schools and influence of ethical and moral standards. Though some times one would feel that the certain responsibility is obligation from the society and organizations rather than his 'individual responsibility' at first, in most cases, the accountability would presumably become one's own eventually followed by the final identification of his specific social identity, and then direct one's behaviors without the force from the exterior world. For example, a soldier would think it is his duty to obey the rules without any hesitation; a surgeon would consider healing the patients as his accountability; and a historian would feel it is his responsibility to discover what is behind the historical descriptions. In fact, different careers and roles form diverse individual responsibilities, which result in individuals'voluntary behaviors.

On the other hand, there are not only specific individual responsibilities in diverse areas but also some fundamental values and accountabilities, which we all human beings cherish. From the moment one can speak or even is born, the society begins to instill the moral and ethical standards, which is so called humanity in every one's mind. The older one is, the deeper influence the humanity would be. When one is just a little child, he would go directly to what he like and claim it. Then when he is old enough, he would realize that it is incorrect and ashamed. And because of the awareness of what is right and wrong, one would probably never do any misdeed again. Actually, humanity is just the common individual responsibility shared by all of us.

However, every one lives in a certain society thereby one's behavior is more or less influenced by forces not of their own making. And to operate normally, every society has its laws, though many times have differences among them. It is true that humanity plays an essential role in ruling individuals' behaviors; yet laws are necessary. Under the control of laws, people who have little individual responsibility would probably not dare to do any crime in fear of law punishment. Besides laws, for example in school, rules are also an important factor as well as individual responsibility. Nowadays, in most universities, a student who does not pass some certain courses in his four years college life would not get his diploma of bachelor's degree. So even if a student does not like his discipline, or dose not care about his GPA, the pressure of graduating forces him not to playing computer or basketball all the time.

Generally speaking, it is hasty and incorrect to conclude that the concept of individual responsibility' is a necessary fiction. On the contrary, individual responsibility plays an important role which cannot be replaced. However, laws and the exterior force also have their significance as well. Thus we can not put either of them aside and pay more attention to another